Erik Kamrath is originally from Wisconsin where he played basketball, baseball, and golf in high school. He was all-conference and all-area in basketball and baseball. Erik attended the University of Wisconsin Oshkosh where he played college basketball for a year. He graduated with a Bachelor’s and Master’s degree in Education. Immediately following his playing career Erik began his coaching career and is entering his 21st year coaching at the high school level and his 10th year as a head varsity coach. He began his career as a freshman and junior varsity boys basketball coach at Oshkosh Lourdes High School and moved to Neenah High School where he served as an assistant for 4 years. Both of these programs have two of the most storied traditions in high school basketball in the state of Wisconsin. After moving to Arizona he coached at Highland High School and was on staff in 2009 when the Hawks made it to the 5AI state championship game. Following the 2009 season he became a part of the basketball program at Williams Field High School in Gilbert, Arizona where he coached and shared his passion for the game of basketball for 10 years. As a head varsity coach, he contributed to 3 region championships, 5 play-off berths, two trips to the elite eight and one to the final four (4A) in the Arizona 5A state basketball tournament. Along with the success of his teams, he has helped a number of his players continue their educational and athletic careers at the collegiate level including NCAA division 1 where one of his former players currently plays at Brigham Young University in Utah.

Coach Kamrath emphasizes the importance of work ethic, respect, discipline, passion, trust, and a team first mindset in his basketball program. His coaching staff is dedicated to teaching student athletes in the program life lessons through the game of basketball. They believe that success on and off the basketball court is a product of focusing on coaching attitude and effort.

Coach Kamrath is a Physical Education teacher and Head Basketball Coach at Fullerton Union High School. His wife, Jessica, works as a faculty member in the Human Communication Department at Cal State Fullerton. They are excited to be a part of the Fullerton Union High School family and the rich history and traditions of the community. Erik and Jessica will stay true to their roots as Wisconsin Badgers, Packers, and Brewers fans. They enjoy watching and playing sports and spending time outdoors camping with their friends and dog Happy – a white boxer. He is very thankful and appreciative to have the support of his family throughout all of the ventures in his career. 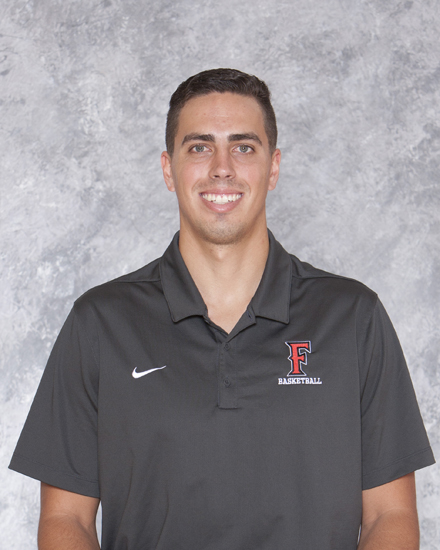 Josh Siemens was born and raised in La Mirada and played basketball and golf at La Mirada High School, where he was All-League Honorable mention for basketball and 1st team All-League for golf, as well as Varsity captain for both sports. Josh attended California Baptist University and graduated with a degree in Business Administration with a Marketing Minor, and then completed his teaching credential and Masters degree in Education at Azusa Pacific University. Josh is now entering his 5 th year coaching at the high school level, and 1 st year on a varsity staff. He began his coaching career at La Mirada High School as a JV assistant for two years before relocating to Fresno and becoming a head JV coach for a year at Sanger High School. After moving back to the area, Josh was hired as a teacher here at Fullerton Union High School and coached the sophomore team last year.

Apart from basketball, Coach Siemens teaches AP Statistics and Geometry at FUHS. In his free time he enjoys playing sports, volunteering at his church, and spending time with his fiancé, Morgan. He is extremely excited about the opportunity to learn and coach at the varsity level with an experienced and successful Head Coach in Coach Kamrath. 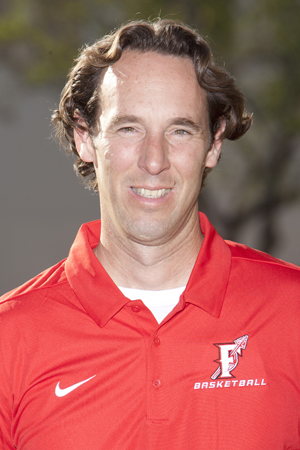 Leon Palmisano grew up in Ventura, California. Leon is the seventh of eight children in the Palmisano family. Leon comes from an athletic family. His father played professional baseball and his grandfather played in the World Series. Thanks to his father, Leon grew up playing all kinds of sports, but his favorite was basketball. He traveled all around the country as a youth attending college basketball camps, as well as playing tennis, baseball and soccer. He graduated from Santa Clara High School in Oxnard, California. During high school, he was the team captain and earned MVP awards from many basketball tournaments. During his senior year, he was a point guard and helped the school win their first State Championship Basketball title. Leon played football, track and baseball in high school, as well. Leon continued to play basketball and started for the Santa Barbara City College team. Leon volunteered to assist the coaches for the UCLA Women’s basketball team, and he eventually earned his college degree at UCLA and a Masters in Education at CSUF. One of his highlights at UCLA was when he won a halftime shoot-out contest during a UCLA basketball game. Leon made a lay-up, free throw, three pointer, and a half court shot within thirty seconds for free tuition and books in front of over 12,000 fans.

After UCLA, Leon traveled to Europe and settled in Athens, Greece for a basketball season. After playing basketball for Team Ilioupoli, he worked in Langley, Virgina as an Analyst for the United States Government. Leon married his lovely wife, Monica. They have three children, who all love having their dad as their coach. Leon has been teaching at Fullerton Union High School for the last 18 years. During his time at FUHS, he has coached basketball, tennis and baseball for 17 of those years. He was the head tennis coach and was very successful, with players winning 5 league titles in the 4 years of coaching both the boys and girls tennis teams. For the last 14 years, he has helped to run the Joseph Palmisano Memorial Basketball clinic to raise tuition money for underprivileged students at his childhood church in Ventura. He is excited to help Coach Kamrath and assist the student athletes. 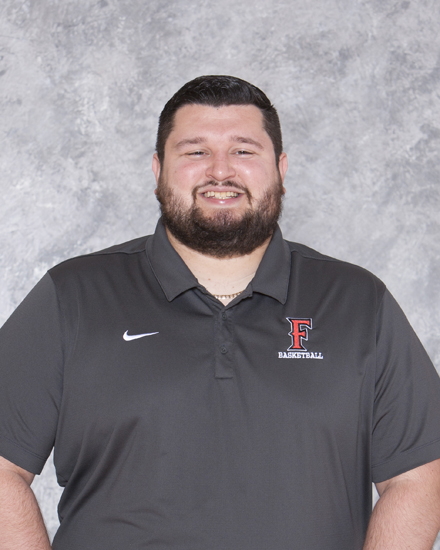 Jacob Rhodes was born in the Bay Area, but grew up in Whittier. He went to St. Paul High School in Santa Fe Springs were he played football, basketball, volleyball, and track. After high school, Coach Jake got his first coaching job at his alma mater at age 19 as a Freshman Boy’s Basketball assistant coach. Around the halfway point that season, he took over as the head Freshman coach. His team went on to become Co-Santa Fe League champs. He stayed in that role for 2 more seasons, finishing in second place, then winning the Santa Fe League outright his final year, going undefeated. His next coaching adventure took him to Woodrow Wilson Classical High School in Long Beach where he spent the last 2 seasons. In his first year, Coach Jake’s Sophomore team finished in 2nd place in Moore League, running with an 8 man roster the entire season. Last season, his Freshman team went through many ups and downs, but the team had great camaraderie and played hard day in and day out.

Apart from basketball, Coach Jake works at Lucille’s Smokehouse BBQ in Brea as a server on the weekends. He is also currently taking college classes online, majoring in History. In his free time, Coach Jake loves to watch and support his Dodgers, Lakers, and Raiders whenever they play. He also enjoys going to the movies, reading, and spending quality time with his fiancée Alexis, his daughter Samantha, and his dog Cocoa. He his very thankful to his family and friends who support him and go to many of his games he coaches in. He is also extremely grateful to Coach Damaine Powell from St. Paul and Coach James Boykin from Wilson High School for believing in him, teaching him, and helping him grow into the confident and fiery coach he is today. And lastly, Coach Jake is ecstatic to have the opportunity to work alongside Coach Kamrath this season and he cannot wait to learn what the Fullerton Indians are all about!

Richard Perretta was raised in Whittier. He attended La Serna HS where played football and basketball, often competing against Fullerton HS. He led his Varsity basketball team as a captain his senior year also earning Second-Team All League honors. A year after graduating he was offered the freshman coaching job at his alma mater by his  coach and mentor Mike Lowe. He would remain there for five years, the last two of which he was the JV coach, winning their league all but his first year. Richard attended California University of Long Beach where he earned his bachelor’s degree in Business Management, and is currently considering a career in education where he can hopefully continue coaching. He is excited to start coaching again and is very much looking forward to learning from Coach Kamrath and the rest of the staff.
Off the court Richard enjoys watching and playing sports, snowboarding, live music, and a fancy restaurant. He currently works as a bartender and server at the Dal Rae, an upscale restaurant in Pico Rivera. Richard recently bought a house in La Habra where he lives with his girlfriend Danielle and their dog Harvey. 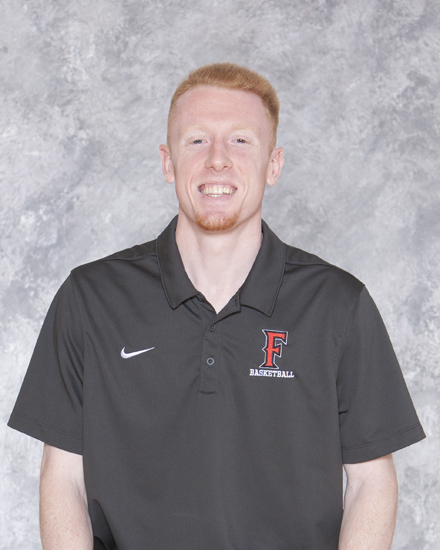 Sammy Jones was born and raised in Yorba Linda and played baseball and basketball at Esperanza High School, where he was named to the Orange County all-star team for baseball. Sammy attended Cal State Fullerton and graduated with a degree in Communications – Journalism. Sammy is entering his first year of coaching, but spent the last four years as a team manager for the CSUF men’s basketball team and coach Dedrique Taylor’s coaching staff.

Outside of basketball, Sammy serves as an instructional aide at FUHS. In his free time he enjoys playing/watching sports and spending time with family and friends. He is extremely excited about the opportunity to enter the coaching world and learn from Coach Kamrath.